BACK TO ALL EVENTS 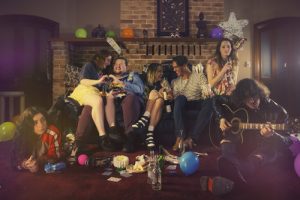 It’s FLORA’S 21st birthday, and she and her friends have rented a beach house for the weekend. Strong drinks, farcical misunderstandings, intellectual debates, broken hearts, and catchy songs abound in Smash Hits And Stereotypes. The characters will confront chaos, creation, sex, cosmic entropy, and cake! This is a theatrical show that fuses together the musical, the ’90s slacker movie, noise rock, and Mozartean opera.

Bec Power stars as FLORA. Samuel Feitelberg is RAY, Denver Naude is VICTOR, Courtney Egginton is GEN, Madeleine Carr is DAWN, Rhiarn Zarzhavsky is OLIVIA, Myles Burgin is BUD, Ella Arendelle is THE MAID, and Richard Holborn is THE CARETAKER.

Smash Hits And Stereotypes was written, produced and directed by Ludwig van Distortion and Coco Grainger, who both hate musicals. This is their third piece of musical theatre in three years.